New Jersey Governor (and key Trump booster) Chris Christie just made it public: he doesn’t even want to pretend to give a flying f**k about New Jerseyans anymore.
Christie is largely being blamed by voters for a NJ government shutdown that left public resources – like parks, beaches, and DMV offices – shut down going into July 4th weekend, and that continues. As you might imagine, the beach, on July 4th in New Jersey, is kinda a Big Thing – and an important part of NJ’s economy for many, many people.
So, you’d think the last thing you’d want to do, if you were Governor, would be to use the beaches for a personal family vacation just after your announced regular New Jerseyans could no longer use them.
You’d be wrong:

On Friday, New Jersey Gov. Chris Christie ordered beaches across the Garden State closed — a reaction to the ongoing budget impasse in the state’s legislature.

Less than 48 hours later, photos from NJ Advance Media showed Christie sunning himself with his family on Island Beach State Park — the only people on the beach because, well, the governor had closed it.
This photo really sums it up. 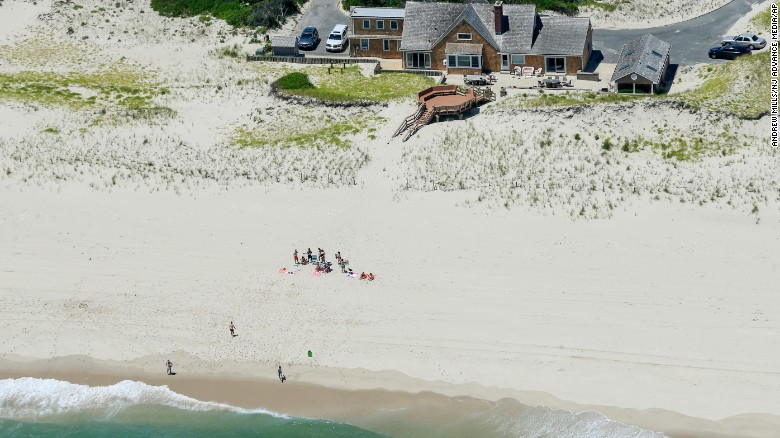 Then, when New Jerseyans asked him about it, he lied about it – and this happened:

After leaving the beach, Mr. Christie held a news conference in Trenton, where he was asked whether he had gotten some sun that day.

“I didn’t,” he said, according to The Star-Ledger. “I didn’t get any sun today.”

But his spokesman, Brian Murray, recalibrated after being told of the existence of the photos, saying, “The governor was on the beach briefly.”

“He did not get any sun,” Mr. Murray added, according to The Star-Ledger. “He had a baseball hat on.”

One person called the pictures “grotesque.”

There are so many to choose from, but I personally think this is the most devastating of @AndyMills_NJ‘s Christie photos. pic.twitter.com/AAEyJbgzEj

Uh, not the thing to be saying given that you, in fact, at this point are the only one able to draw lines in the sand in NJ.

The image of a grotesque Chris Christie sunning himself on an empty state beach he closed is an evocative metaphor for our era of politics pic.twitter.com/TCZbXn17nx

Sure, @ChrisChristie. Let’s shut down NJ during one of the busiest tourist weekends. Thanks from all of us at the Shore. #njshutdown pic.twitter.com/FSi3KzsXNG